The Institute of Archaeology of the Russian Academy of Sciences is a modern research centre aiming to acquire new knowledge about ancient societies and cultures. Its profile is largely determined by academic traditions and the functional structure established many decades ago. The Institute is the successor to the oldest centre of archaeological research in Russia – the Imperial Archaeological Commission, founded in 1859 in St Petersburg to study and preserve the sites and monuments of the past. 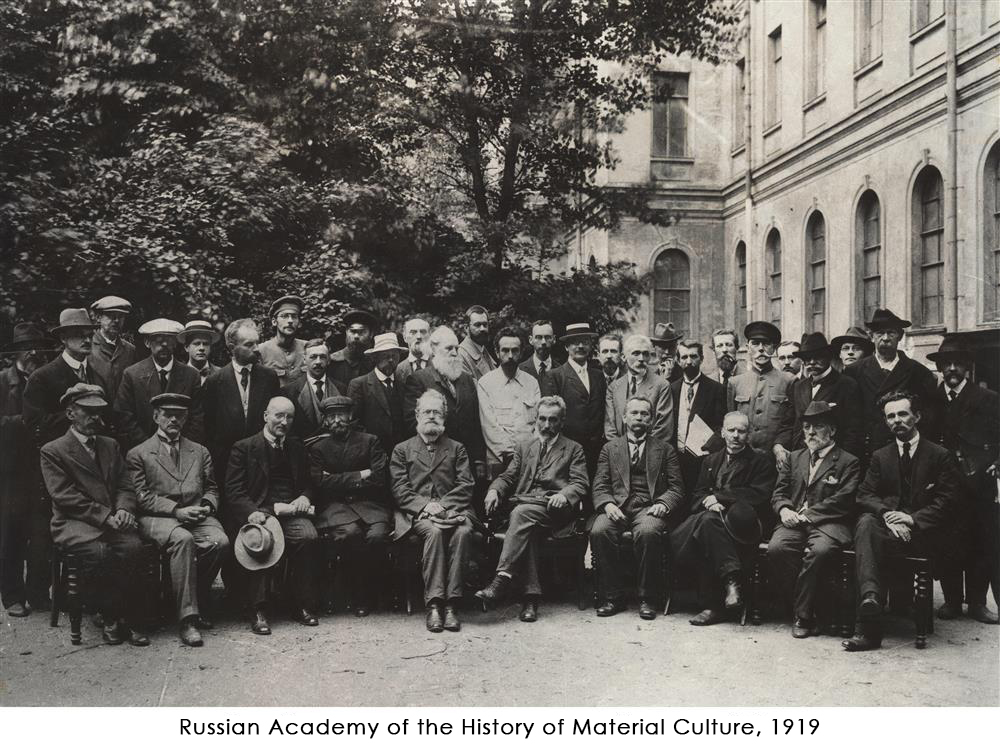 In 1919, by the Decree of Sovnarkom (the Council of People's Commissars) the Archaeological Commission was reorganised into the Russian Academy of History of Material Culture (RAHMK). It became the leading research body in the field, aiming to provide "a comprehensive study of monuments of the past, arts, antiquities and material culture of the common people...; to work out scientific methods of their preservation; to launch research in theoretical archaeology and to conduct archaeological excavations ...” The Moscow Branch of the RAHMK was also established in 1919 and played the main role in the development of the Academy.

In 1932, the Moscow department of RAHMK was reformed into a Branch of GAHMK operating from the State Historical Museum; it united archaeologists working in various institutions throughout the country to help them with funds to pursue their fieldwork and research. The situation changed in 1937 when GAHMK joined the Academy of Sciences of the USSR; since then it was called the Institute of the History of Material Culture (IHMK) with its Branch located in Moscow. Thus, from that time on the centre of archaeological research worked in the capital of the country employing about twenty researchers. S.P. Tolstov was appointed as the head of the Moscow Branch in 1939.

During the first decades after the Revolution of 1917 the archaeological science of Moscow was largely influenced by the ideas and academic interests of V.A. Gorodtsov. He was a member of the Moscow branch of the RAHMK, yet, V.A. Gorodtsov failed to see the Branch as a future centre to unite archaeologists. His plan was to establish another archaeological centre under the government of the Museum Department of the Glavnauka (the centralized administration for museums and research institutions), thus depriving the RAHMK of its leading status.

However, the disciples of V.A. Gorodtsov (S.V. Kiselev, A.V. Artsikhovsky, A.P. Smirnov, A.Ya. Bryusov, B.A. Rybakov, O.N. Bader and others) proved themselves to be the most productive researchers of the RAHMK; they became the pillars of the Moscow Branch of the Institute and carried out the ideas and methods of the Gorodtsov school promoting archaeological codification, cultural stratigraphy, and the understanding of the ways of spreading culture; all of these had a significant impact on the research programme of the Moscow Branch, and later on, on the Institute of Archaeology of the Academy of Sciences of USSR.

It is generally accepted that in the late 1920s Moscow archaeologists brought Marxism into archaeology, but at the end of the 1930s the same researchers (A.V. Artsikhovsky, S.V. Kiselev, A.P. Smirnov, A.Ya. Bryusov) became the ardent supporters of a "historical approach" – i.e. a direct study of material monuments in order to recreate certain historical phenomena in all their diversity – from ancient manufacturing to the details of everyday life of the time.

Due to tragic events of World War II the Institute Director’s office was transferred to Moscow in 1943. By this time, Moscow had already become a highly developed centre of academic exploration. In early spring of 1945 (World War II not being over yet) the All-Union Archaeological Conference – the first large-scale forum – was held in Moscow. Its aim was to summarize the general results of archaeological research in the USSR as well as to draw up a plan for further work; the Moscow Institute of Material Culture History took a leading role in academic archaeology.

In the wake of the victory of Russia over Germany in WWII there was a period, when the historical heritage of both Russia and the republics of the Soviet Union was fully recognised to be of great significance. At the end of the 1940s and during the 1950s the Institute became a leading research centre. At that time, the current administrative functional framework of departments and sections was established according to chronological and cultural-historical approach. Supplemented units in charge of academic supervision over field excavations throughout Russia (Field Research Department) and the collection and storage of reports from exploration digs and active excavations (Archive) were added to this administrative structure.

The system partly recreated the administrative framework of the Imperial Archaeological Committee adapting it to a new historical situation; it provided an opportunity for centralized research planning. On the other hand, it made possible to conduct the research across the wide geographical and chronological range, focusing on the investigation of new cultures and the study of “blank spots”. In 1957, the Institute received its modern name, which reflected more accurately the subject matter of its research.

The years 1960s–1970s brought new ideas and challenges. Archaeology gradually managed to shake off the pressure of Marxism. It came to combine a historical approach with learning to value specific fieldwork research and traditional study of material objects of the past; it further acknowledged the advances in modern science and technology.

Researches of antiquities of certain chronological periods grew into full-scaled diverse academic programmes with dynamic and ever-expanding agenda. The growth of excavations and the rapid accumulation of new materials gave rise to developments in classification of antiquities, archaeological source study and a general strategy for collecting and using primary archaeological data.

The progress in natural sciences put on the agenda the use of new scientific methods and achievements to broaden the cognitive potential of archaeology. In 1960, the Institute of Archaeology opened a number of laboratories to conduct dendrochronological, spectral, palynological and some other analyses; in 1967 they were joined together into a united Natural Science Research Laboratory.

The creation of the dendrochronological scale of Northern Eastern Europe and developments made due to spectral and metallographic analyses in the field of history of ancient metallurgy and mining, proved the Laboratory to be the leader in the application of advanced technologies for large-scale studies of antiquities.

Universally recognized role of the USSR as a superpower brought the archaeology beyond domestic borders to study most significant cradles of world civilization. In 1961, a unit to study International Archaeology was formed at the Institute. The Iraqi expedition of the Institute led by R.M. Munchaev in 1969, set up Russian archaeological excavations in Mesopotamia; they were conducted in Iraq until 1984, and in Syria from 1988. The Institute, therefore, addressed key problems of ancient history: the formation of the producing economy and the first proto-urban centers in the Middle East.

The Institute research programmes in the 1960s–1970s as well as in the following decades are very diverse in topics, concepts and methods. Among the discussed issues were ethnogenetic research, historical and technological development, specific archaeological analyses, theoretical interpretations of characteristics of archaeological sources, various approaches to the reconstruction of the past based on material remains. The Institute conducted excavations in new sites in Bulgaria and Afghanistan, as well as in central parts of European Russia.

The Institute nearly always had a number of various academic schools, research groups with their own specific approaches, collaborating and even competing with each other. Personalities and their individual academic interests were always respected at the Institute. 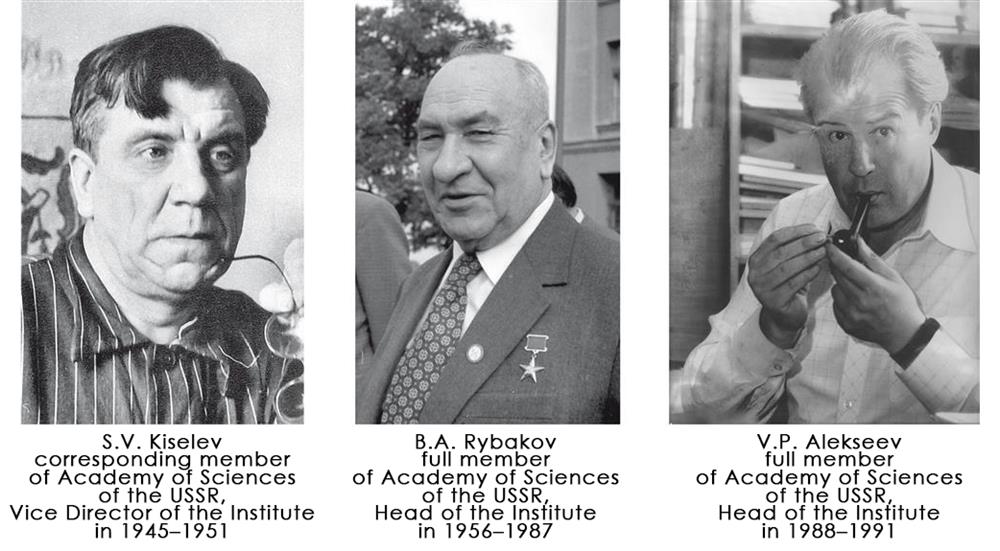 B.A. Rybakov, the Director of the Institute for more than 30 years (1956–1987), who seemed to be preoccupied with his own studies of Medieval Russia and Eastern Slavs, did a lot to build up the functional structure of the Institute, and to make it a research center of archaeology with wide and diverse programmes.

The Department of Archaeological Sets was established at the Institute in 1972 to put together archaeological documentation of Russian historical and cultural heritage, including that of a thorough exploration of many regions of the country. The department of Preventive and Contract Archaeology was formed in the same year, thus making the Institute the leader in rescue surveys in advance of construction or other land development. A great number of young researchers in pursuit of their professional ambitions worked there.

According to its editor-in-chief, the publication of the 20-volume set of “Archaeology of the USSR” (launched in 1981) was to present the general information about certain periods of Russian early history and its largest cultural communities of antiquity and the Middle Ages. "Archaeological Discoveries" (published annually since 1965) introduced newly acquired results of field projects carried out throughout Russia.

In 1960–1980 the Institute was given a wide range of tasks and responsibilities - from developing a theoretical framework of archaeology in the context of growing interest in the theory of this discipline in the West (Department of Theory and Methodology was created in 1985), to compiling passports of archaeological sites and monuments, and issuing permits and approvals for archaeological fieldwork.

The history of the Institute of Archaeology in the second half of the 20th century was defined by archaeological discoveries of Northern Eurasia, the excavation and research of impressive archaeological sites in certain locations and of certain periods in vast territories from the Baltic Sea to Mongolia, and the exploration of historical trajectories in our country from initial resettlements till the early New Age.

At the end of the 1980s the scale of the research conducted at the Institute reached its peak during its work in the Soviet period. This is perfectly reflected in the diversity of fieldwork projects and the number of people working there, as well as in the number of publications. Yet, the demand for new fields of research, for freedom to discuss new ideas, for practical solutions to challenges, for full integration of national archaeology into the global one was high.

The director of the Institute and Member of the Russian Academy of Sciences Alexeev V.P. (1988–1991) supported greatly the new projects. Among his priorities was paleoecological research, together with the study of biological characteristics of ancient and medieval societies, the development of new approaches to reconstructing the paleoenvironment in order to assess its influence on the progress of ancient and medieval communities.

Additional structural units were established at the Institute to develop both novel research enterprises along with the traditional ones. V.P. Alekseev supported the idea of expanding the Moscow archaeology sector (started in 1987) in order to advance archaeology of the late Middle Ages – the early New Age as an independent project. In 1990 the Department of Theory and Methodology formed a new group (called Physical Anthropology) to promote the exploration in bioarchaeology and paleoecology.

V.P. Alekseev’s vision of expanding the study of Stone Age cultures on the basis of Moscow academic platforms was realised in 1992 when the sector for Paleolithic and Mesolithic studies was established. The style of work and communication, which he created at the Institute, built a favourable environment for conducting new studies, to support young researchers, to publish the results, and to promote further extensive international partnership.

Director of the Institute of Archaeology

Member of the Russian Academy of Sciences N.A. Makarov 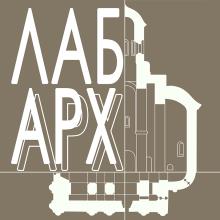 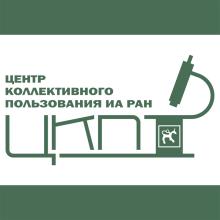