Archaeology of the Moscow Kremlin: The 2016–2017 Excavations 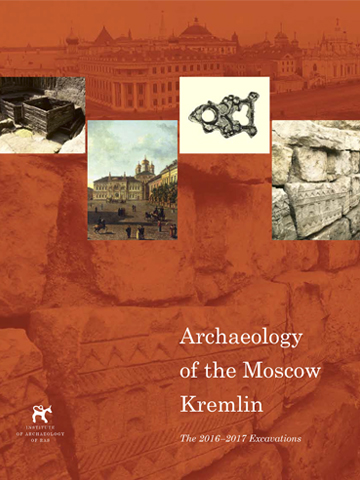 The English translation of the book "Archaeology of the Moscow Kremlin" has been published. It is a collection of works, which comprises the results of excavations Institute of Archaeology of Russian Academy of Sciences led by N.A. Makarov in the historical heart of the Russian capital – on Kremlin Hill. The expedition led by N.A. Makarov carried out research on the plot where the now demolished Building 14 had previously stood in the Moscow Kremlin – the former site of Chudov and Voznesensky (Ascension) monasteries, as well as the Maly Nikolaevsky Palace. The book is richly illustrated and aimed at the general reader. The book comprises 22 essays.

In the introductory article ("What do we know of the of the Kremlin’s antiquities") N.A. Makarov talks about the development of the study of the city centre, about the most controversial issues of the history of early Moscow, as well as about recent study using the whole range of cutting-edge technologies and research methods. Summing up, the author highlights three major areas of examination: the rise of Moscow as an urban centre of North-Eastern Rus’, its history in the general context of urbanization in Old Rus’ in the 12th and 14th centuries; and the culture of Moscow Rus’ and its political elites in the late medieval and early modern times.

The article "Eastern part of the Kremlin: history and historical topography" (A.V. Yaganov, A.V. Engovatova, N.A. Makarov) reviews written sources. The authors consider the history of the development of the territory of Chudov Monastery. Three articles “Monastery buildings: the remains of the church of the Miracle of Michael the Archangel, galleries and refectory", "Monastery buildings: the churches of the Annunciation and St Metropolitan Alexis, 1680-1686" (A.V. Yaganov) and "Maly Nikolaevsky Palace" (A.V. Engovatova, A.V. Yaganov) tell about the adjustments and new details based on the excavations results which have been added to the history of the construction of this part of the Kremlin.

N.A. Makarov, A.V. Engovatova and V.Yu. Koval in their article "Objectives and progress of the excavation" describe the sequence of works: where trial trenches were dug, what finds were discovered there and how they decided which sites were the most promising to study early history. Articles "The oldest horizons: constructions and occupation layers " (N.A. Makarov, A.V. Engovatova, V.Y. Koval) and "Natural habitats of the environs of Kremlin Hill in the Middle Ages" (A.S. Aleshinskaya) explore the scientific methods used for dating cultural deposits, as well as palynological and paleosoil research.

In the articles "Occupation layers in Ivanovskaya square " (N.A. Makarov, K.I. Panchenko) and "Underneath the foundations of the VTsIK Red Army Commander School: Occupation layers and the cemetery in the central part of Chudov monastery". (N.A. Makarov, V.Yu. Koval) the authors give detailed characteristics of occupation layers. Thus, a five-meter layer under Ivanovskaya Square in many areas retains the horizons of different historical periods, successively following one other - from the second half of the 12th century to 18th – 19th centuries. By contrast, the stratigraphy on the section of the Kremlin's Building 14 was seriously damaged: its builders shaved off upper layers, and the foundations of the building penetrated deep into the mainland.

The occupation layers of the end of the 12th –  the first third of the 13th centuries under the Building 14 reveal many finds related to the pre-Mongolian time: jewellery, household items, which are described in detail in the article "The oldest horizons: constructions and occupation layers" (V.Yu. Koval, I.E. Zaitseva, R.N. Modin). One of the finds is the oldest Moscow Cyrillic inscription known to date.

V.Yu. Koval in his article "The Apanage period: material and Oriental influences" analyzes the changes that occurred in the material culture after the Batu Khan’s invasion in the 13th–14th centuries. In addition, he considers the special features of buildings of that time.

E.E. Antipina and L.V. Yavorskaya in their article ("Archaeosoological remains from the occupation layer") tell about an approximate meat diet of Muscovites from the 12th till the end of the 17th century, which was reconstructed by the kitchen remains. It turned out that beef was its staple, accompanied by much smaller amounts of pork and occasionally by mutton and goat meat. Curiously, meat of moose or wild boar were associated with the prestigious owner of a rich mansion, while hare bones, perhaps from a pie, diversified the diet of a lower status Muscovite household.

During excavations, part of the Chudov Monastery cemetary was investigated - the place where high-profile leaders of the church and those in the service of the Grand Princes of Moscow, and later of the tsars, were buried from the latter half of the 14th century until 1771. Several articles describe the funeral rites and structures; specify the information about the personalities and social status of the buried (L.A. Belyaev and V.S. Kurmanovsky, "Monastery cemetery: sarcophagi and tombstones"; A.V. Engovatova and E.E. Vasilyeva, "Monastery cemetery: funeral rites "; A.V. Engovatova, "Headdress from Chudov monastery’s cemetery: the volosnik").

Two more articles in the collection are devoted to the study of the remains of the buried using modern scientific methods. They made it possible to shed light on different aspects of life of those who played an active role in the administration of the Russian state and Church from the 14th to the 17th century (M.V. Dobrovolskaya, "Moscow nobility: from the anthropological finds in Chudov Monastery’s cemetery"; A.V. Engovatova "Chudov monastery’s cemetery: the food Moscow nobles ate in the light of isotope analysis").

The English translation of the book was provided by V.S. Makarov - a scholar of Early Modern English literature and culture, a member of several teams that worked on editions of the "Literature Monuments" series. The academic and literary editing of the translation was carried out by Professor of the University of Lincoln Carenza R. Lewis – a scholar researching medieval rural settlements, demography and landscapes, who took part in a series of popular scientific programmes TimeTeam.